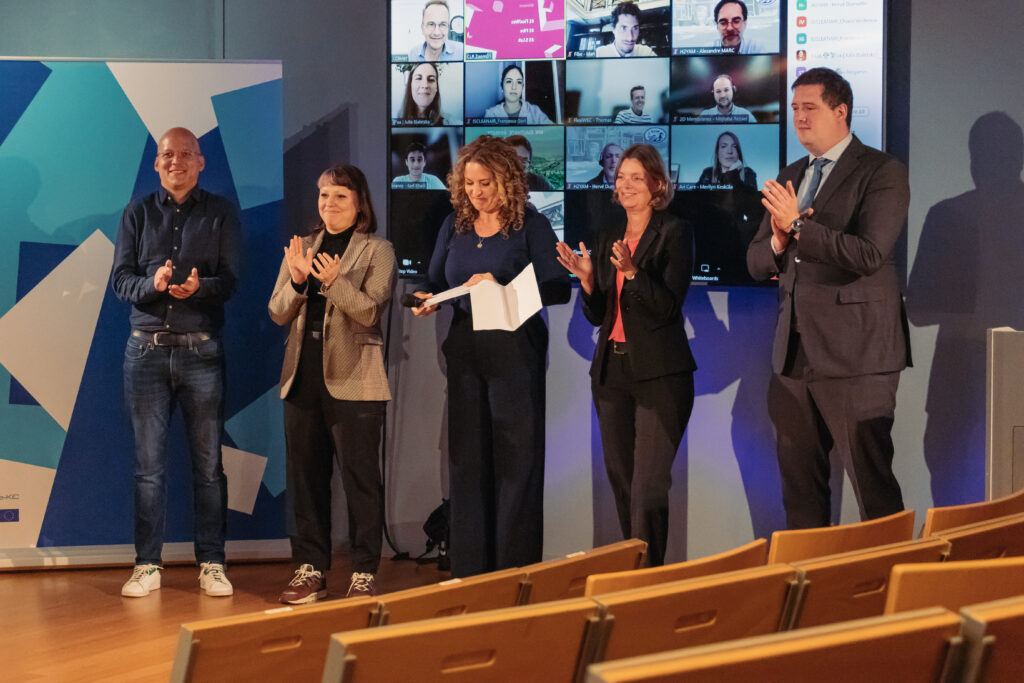 “Recepta” team placed 2nd place in the “ClimateLaunchpad” European Final among 54 teams from 18 countries, and won a ticket to the Global Final.

The 2022 European final of the ClimateLaunchpad program, the world’s largest “cleantech” (clean technology) startup program, in which 58 startups graduated from Azerbaijan in the last 6 years and more than 50 countries participated, has been completed. Azerbaijan was represented by 3 teams, “GreenPack”, “Ateshgah” and “Recepta” in the final. Among them, “Recepta” is the winner of the 2nd place in the “Adaptation and Sustainability” category and has won a ticket to the Global Final.

54 teams from 18 countries participated in the European Final. These countries include Azerbaijan, Cyprus, Israel, Romania, Turkey, Ukraine, Austria, Estonia, Finland, France, Ireland, Italy, Lithuania, Portugal, Spain, Switzerland, the Netherlands and the United Kingdom. In the next stage, 24 startups selected from each region will compete in the Global Final for a cash prize of 10.000 Euros and Acceleration prizes.

The official organizer of the ClimateLaunchpad program in Azerbaijan is the “Social Innovation Lab” innovation center, and the main partner of the program for 2022 is the Innovation and Strategic Development Agency.

What were the Azerbaijani startups participating in the European Finals?

Recepta – The startup team offers a technological solution for creating digital receipts. Receipts are transmitted directly from the seller to the mobile application on the consumer’s phone, completely eliminating the need to prepare a paper receipt.

GreenPack – This project produces a bio-based material that can be used instead of plastic in the packaging industry. Since the production of raw materials is realized using food waste, the process can be carried out at normal atmospheric pressure and 65-70 degrees Celsius, which means a lot less energy than plastic production.

Israel Griol Barres, an expert of the ClimateLaunchpad program for more than 8 years, Jasur Hasanov, founder of the “Social Innovation Lab” innovation center, and other local mentors launched the program with an intensive camp held on July 15-16 consisting of 9 modules.

After the two-day bootcamp, the teams practice 6 weeks of in-country coaching sessions on the 6 important modules identified by ClimateLaunchpad, prepare the initial version of their projects and themselves for the country finals.

After the internal coaching sessions, the teams presented in front of the judges to win the first 3 places and get to the next stage. In general, the top 3 teams in the national finals of each of the 50+ countries will qualify for the Regional Finals to be held in September 2022.

24 Global Final participants will present in front of the Europe’s leading investors and entrepreneurs.

At the Global Final, 16 startup projects will be accepted to the 6-month “Global ClimateLaunchpad Accelerator” program, where small ideas are transformed into large businesses.

In addition, the first 3 teams in the Global Final will win cash prizes:

What has Azerbaijan achieved in recent years?

With the organization of the “Social Innovation Lab” innovation center, the ClimateLaunchpad program in which more than 50 countries participated in the last 4 years, including 13 startups from Azerbaijan, 52 startups were accepted and successfully completed the accelerator program. Top-3 startups in the regional final — 12 startups in general represented Azerbaijan in the global final. In 2017, our national final winner also managed to become one of 15 startups among 105 startups in the global final!

For university psychologists, scientists and researchers

For university teachers, scientists and researchers, let’s mention that in the past years, one of the researchers in the ClimateLaunchpad program, being a Professor, has participated in about 10 scientific fields with his own projects. In 2017, the winner of the national final was Professor Yusif Abdullayev and his students.

They successfully represented our country in the global finals and managed to become one of the 15 startups among the 105 projects among the participating countries.

Accordingly, they were accepted to the Climate-KiC acceleration program in Edinburgh with their projects and continued their work in developing their projects.

For our young people, let’s also note that Reyhan Jamalova (the founder of the Rainergy project), whose name is heard by everyone in our country, started thinking about her project in order to participate in the ClimateLaunchpad program. In the finale, he won the “audience’s favorite project” award. After Social Innovation Lab’s ClimateLaunchpad program, Reyhan became one of Forbes magazine’s young inventors and entrepreneurs for 2018 (Forbes Under 30)!

If you have questions, you can write to the Facebook pages of ClimateLaunchpad Azerbaijan or Social Innovation Lab, or you can ask your questions by writing to our Whatsapp business number +994772337792.

Let’s note once again that the official organizer of the ClimateLaunchpad program in Azerbaijan is the “Social Innovation Lab” innovation center, and the main supporter of the program for 2022 is the Innovation and Digital Development Agency. Media partners of the program are Startup Azerbaijan, Technote Media and Edumap organizations.